The symmetry, fullness, and shape of your eyebrows play a major role as far as face aesthetics are concerned. And if you’re reading this article, I’m sure you agree. So let’s find out everything we can about MICROBLADING vs. TATTOO.

Brows highlight your eyes as well as frame your upper face. Patchy or thin eyebrows are not something most women desire. But they find relief in knowing that there are non-invasive methods to improve the condition of the eyebrows instantly. And that treatment is known as microblading.

It’s quite a popular enhancement technique for the brows. Microblading improves the thickness, definition, and shape of your eyebrows. And it does so by using a special tool equipped with a special blade. This blade transfers dye into your skin’s dermal layer, the second one. It creates fine strokes mimicking the display of natural brows.

But a lot about this particular technique is misunderstood. For example, more often than not, people think that microblading is no different than getting a tattoo. Even though the procedures of both methods do sound similar, they are indeed very different. But how? Time to find out!

Microblading: What is It?

The process involves the use of needles that make way for the pigment to be placed in your skin. When the fine cuts that the needles create heal, what forms is a crisp, thin line. This mimics the shape and texture of natural eyebrows.

Since pigment insertion is a part of the deal, you cannot force a lot of it into your skin. So that explains the shorter lifespan of microblading. As opposed to the permanent effects of traditional tattooing!

To be more specific, microblading can last from anywhere between 6 to 18 months.

So is microblading considered tattooing? The answer to that would be NO. 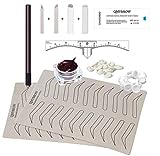 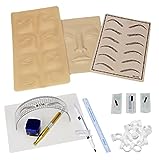 Tattoo: What is it?

Opting for the traditional tattooing technique is another option. The method uses needles and the tapping motion to penetrate the skin. Such an action is performed either by machine or hand. The movement inserts more pigment into your skin. As a result of which tattoos become permanent.

For tattooing eyebrows, you get to choose from a variety of designs/textures. The three common ones are discussed below.

This is the kind of tattooed eyebrows women think of. Sharp, defined lines that look like you’ve used an eyebrow marker or pencil.

Have you ever filled in your brows using the powdered form of makeup? If yes, then that’s what these tattooed eyebrows look like. The technique is the most suitable for you if you prefer fullness over shape.

These types of eyebrows look almost like microblading. But the former has been a part of the picture for longer than the latter. The strokes, after healing, might not appear to be as crisp and fine as microbladed eyebrows. Even so, they create a soft, natural look with relatively longer lasting results. 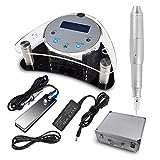 Now it’s time to discuss the main topic of the article.

It’s not uncommon to think of microblading as tattooing. Technically, the methods are nearly identical. But not 100 percent accurate! In simple words, technically speaking, microblading does mean eyebrow tattooing. However, the technique is not the same. It’s more like cosmetic tattooing.

So what I’ve done below is discussed the key points of distinction between the two.

The procedure creates fine lines that don’t bleed out. Unlike traditional tattooing that is performed with a machine. When a machine is a participant, your skin is exposed to greater chances of injury. The lines it produces lack finesse and are prone to bleeding out.

Over time, tattoos tend to become thicker. Just look at anyone with a tattoo handwriting. You’ll see the difference in the effect.

Microbladed fine lines are likely to fade with time. In most cases, they begin to dull after a year. And continue fading for almost 3 years. And it’s quite obvious why, isn’t it? I mean the technique doesn’t deposit a lot of ink under your skin. The ink is placed inside the dermis. So in there, it tends to move around.

But when a lot of ink is used, as in the case of traditional tattooing, the appearance remains consistent. More often than not, it expands as well. So now you understand why microblading ink disappears or fades. (Nontoxic tattoo ink ingredients)

Here’s another fact that you probably don’t know. Microblading ink is not the same as traditional tattoo ink. The former’s capacity to maintain original hue, as time passes, is way better. As for the latter, the ink turns brown or blue over time. But with microblading, the colors only get lighter. They don’t change their tones.

Here’s the pain factor of the Microblading vs. tattoo debate.Microblading artists use a topical anesthetic for the procedure. This numbs the majority of the pain. Most microblading clients experience minimal to no pain.

On the other hand, you might fear to get a traditional tattoo. On the single account of pain! But this is only applicable to certain parts of your body.

How to Prepare Someone for First Tattoo?

Every hand-drawn microbladed hairstroke blends in with your real hair. As for eyebrow tattooing, it looks more filled in.

Microblading vs. Tattoo: What Technique Is Better for You?

How do you know if you should opt for microblading or tattoo? The most important thing to understand here is that only a professional will be able to help you decide. I mean does your skin have the ability to withstand such techniques? You need the advice of a skilled technician at such times.

Sometimes brittle, thin, and vulnerable skin does not heal from microblading trauma. The outcome of which presents itself in the form of fading, smudging, or blotching. Although rare, scarring as well.

However, if you prefer full, dark brows, then you might not appreciate the quality of microblading. You’ll end up applying makeup over your perfectly shaped microbladed brows. Only because you want them to look fuller!

So just remember that microblading adds shape and hair. It does not fill.

What matters to you the most is what’s going to sway you in the most suitable direction. Don’t you agree? So is there anything else about tattooing or microblading that you would like share here?

Thank you for reading the article. I hope you liked what you read so you can come back for more.

Trying to find the best curling iron for short hair depends on your hair type. And without a doubt, finding the kind of curl you want, especially for short hair, is not only a matter of price but of safety, too! If you’ve ever sported short hair before, you can understand how hard it is…

There’s no denying that microblading adds an attractive change to the eyebrows. But here’s an important question. How long does microblading last? And here’s another one. Is microblading worth the effort and time? The outcome can last anywhere between 9 and 15 months. It all depends on multiple factors, which I have discussed below. After…

So quarantine boredom has driven you to seek out DIY purple hair colors, huh? Us too. That’s why we’ve taken to the internet to gather some of the best in one place! Whether you’re dying your hair for yourself or to take some Instagram-worthy selfies, coloring your own hair is totally worth it. But before…

Picking the right moisturizers can be tricky. Choose wisely, and your broken out, oily, or cracked skin will disappear in days, Choose poorly, and you may have made your problem so much worse. If you’ve struggled with sensitive skin for some time, check out our top ten picks for moisturizers in 2019.   Quick Navigation…

After doing research for the best facial steamer, I’m determined to find you the right product. There are many professional facial steamers out there that are easy to use and durable. If you prefer something less expensive or need only a higher-grade steamer, I have options for you too. Believe it or not, but face steamers…